Here you will find the key resources to get you up to speed on the issues quickly.

(click on the respective title below to see more details)

Introduction to EMR and C4ST

Here is a powerpoint presentation covering everything you need to begin understanding the issue of Electromagnetic Radiation and who Citizens 4 Safe Technology is.

Easy steps you can take to minimize your exposure to EMR. 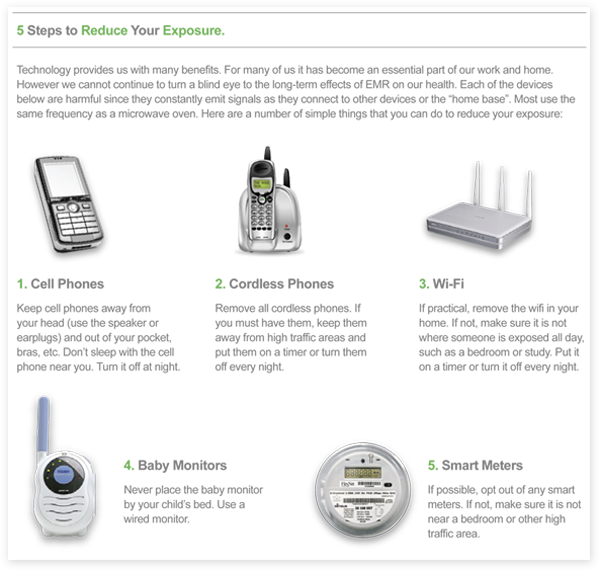 What every Canadian should know about Electromagnetic Radiation and the 5 steps to reduce your exposure.

All you need to begin understanding Electrosensititvity (ES).

Here are a few video clips featuring CNN's Sanjay Gupta and CBC's Peter Mansbridge as they  discuss the dangers of electromagnetic radiation and cell phones.

Our Children, Our Future, Our Responsibility

This pamphlet reviews precautionary advice by governments to reduce your exposure to cell phone radiation.

Three of the most prominent minds in modern science have joined forces to produce a document that reformulates how electromagnetism affects living organisms and the failure - through intent or ignorance or indifference - of science, governments and big business to protect all living things.

The Link Between Wireless Radiation and a Host of Serious Illnesses

The longtime president of Microsoft Canada is now our country’s leading advocate for wireless radiation safety. Vitality invited high tech leader Frank Clegg, now CEO of the new non-profit organization, Canadians for Safe Technology (C4ST), to update our readers on what Canada is (or is not) doing to protect your health, and what you can do in this election year to protect yourself and your children.
Here is a report on his research and conclusions.

The American Academy of Pediatrics and the Canadian Society of Pediatrics state infants aged 0-2 years should not have any exposure to technology, 3-5 years be restricted to one hour per day, and 6-18 years restricted to 2 hours per day (AAP 2001/13, CPS 2010). Children and youth use 4-5 times the recommended amount of technology, with serious and often life threatening consequences (Kaiser Foundation 2010, Active Healthy Kids Canada 2012). Handheld devices (cell phones, tablets, electronic games) have dramatically increased the accessibility and usage of technology, especially by very young children (Common Sense Media, 2013). As a pediatric occupational therapist, I'm calling on parents, teachers and governments to ban the use of all handheld devices for children under the age of 12 years. Following are 10 research-based reasons for this ban. Please visit zonein.ca to view the Zone'in Fact Sheet for referenced research.

Why Children Absorb More Microwave Radiation Than Adults: The Consequences

Computer simulation using MRI scans of children is the only possible way to determine the microwave radiation (MWR) absorbed in specific tissues in children. Children absorb more MWR than adults because their brain tissues are more absorbent, their skulls are thinner and their relative size is smaller. MWR from wireless devices has been declared a possible human carcinogen. Children are at greater risk than adults when exposed to any carcinogen.

Why Children Absorb More Microwave Radiation Than Adults: The Consequences

Steve Jobs Was a Low-Tech Parent

“So, your kids must love the iPad?” I asked Mr. Jobs, trying to change the subject. The company’s first tablet was just hitting the shelves. “They haven’t used it,” he told me. “We limit how much technology our kids use at home.”

44 Reasons To Believe Cell Phones Can Cause Cancer

Cell phones emit microwave radio-frequency radiation. Fact. This radiation has the ability to penetrate our bodies. Fact. Our governments do virtually nothing to protect us from these dangers. Fact. And yet there is strong evidence, multiple peer reviewed studies, to indicate that cell phones cause cancer and other diseases.

On the Breaking Bad spin-off Better Call Saul, the character Chuck McGill, a lawyer played by Michael McKean, has a rather memorable condition. He frequently wraps himself in a space blanket to protect his body from cell phones or wireless internet, claiming the electromagnetic fields emitted by these devices sicken him. He has — or thinks he has — a case of what’s known as electromagnetic hypersensitivity, or EHS.

Dr. Oz Alert - Why Cell Phones Could Cause Cancer in Kids

This extract from S6 E143 of TV show Dr. Oz discusses the potential harmful effects of cell phone radiation in kids in this segment subtitled Dr. Oz Alert - Why Cell Phones Could Cause Cancer in Kids.

Is Wi-Fi in Schools Safe?

A primary responsibility of being a parent is diligently protecting the safety and well-being of your children. We spend a lot of time teaching our kids techniques for navigating dangerous situations, scrutinizing the individuals and institutions we temporarily entrust them to, showing them how to eat right, looking after their personal hygiene and so on. When it comes to a rising new concern that could potentially contribute to a host of health complications, we owe it to ourselves, and our kids, to listen and learn.

C4ST is completely funded by concerned citizens such as yourself.

Stand Up As Canadians...

...and demand Safety Code 6 be changed to protect our future.

Become a member of
Canadians For Safe Technology