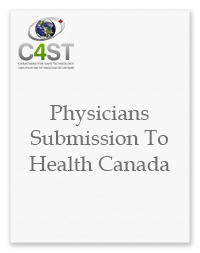 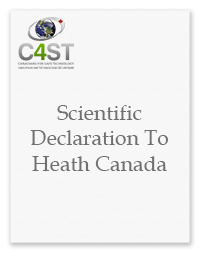 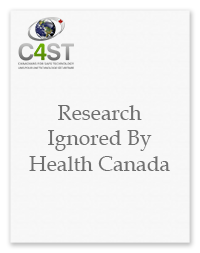 Health Canada has asked for public input on Safety Code 6 to be based on scientific and technical nature only, yet their review to date has been noticeably incomplete regarding current scientific facts and research that are available. Estimates are that there will be approximately 200 million wireless devices in Canada by 2020. It is critical that HC invest the resources required to perform a proper and complete scientific review of the evidence now

Over twenty medical doctors urge Health Canada today to recognize an alarming trend as microwave radiation from common wireless devices is making some of their patients sick.

The doctors will submit a letter of concern to Health Canada stating that science now points to the probability that low level microwave radiation from cell phones, Wi-Fi and cell towers can cause a range of health problems, including infertility and cancer.

The doctors are supported today by more than fifty international experts in biology and microwave radiation who agree that Health Canada must update its safety guidelines if we are to protect Canadians from ailments such as heart rhythm irregularities and increased cancer rates. They also underscore the need to protect children.

“Health Canada has disregarded or minimized certain recent studies, such as cancer, DNA damage, protein synthesis, stress response, and detrimental biological and health effects in humans that occur at radiation levels far below the existing Safety Code 6 Guideline”, he said.

C4ST has identified 139 studies not reviewed by HC that show harm from wireless devices at levels significantly below SC6.


C4ST Provides an Opportunity for Canadians to Address Health Canada

Despite being presented by Health Canada to be a public consultation, they inexplicably announced (on their website) that "...only feedback of a scientific nature... can be considered in the finalization of a revised Safety Code 6". C4ST feels that this decision fundamentally excludes Canadians who suffer from electrosensitivity and others, simply because they are non-scientific.  Excluding such testimony contradicts the idea of this being a "public consultation" open to all Canadians, as well as contradicts the openness and transparency commitment made by Health Canada and Health Minister Rona Ambrose.

Below is an extract from Health Canada's website, C4ST has highlighted the controversial exclusion.

Véronique Riopel will summarize and translate the 10:30am press conference into French.

Dr. Carpenter, co-editor of The Bioinitiative Report, is a Harvard-trained public health physician and an expert in the field of biological effects of electromagnetic radiation will take questions from the floor.

Director Institute for Health and the Environment, University at Albany and Professor of Environmental Health Sciences, School of Public Health

Dr. David O. Carpenter MD, PhD., Director, Department of Public Health, State University of New York, Albany. Dr. Carpenter is a public health physician who serves as director of the Institute for Health and the Environment, a Collaborating Center of the World Health Organization with which Dr. Carpenter works closely on issues related to children's environmental health.

He previously served as Director of the Wadsworth Center of the New York State Department of Health, and as Dean of the University at Albany School of Public Health.

Dr. Carpenter is a public health physician whose research focuses on the study of various environmental causes of human disease, especially the chronic diseases of older age and exposures that result in reductions of cognitive function in both children and adults.

Dr. Carpenter received his medical degree from Harvard Medical School, and has more than 370 peer-reviewed publications, 6 books and 50 reviews and book chapters to his credit.

Health Canada is only interested in hearing comments based on the scientific and technical aspect of Safety Code 6, deliberately excluding Canadian's who suffer from electrosensitivity.  C4ST is providing an opportunity for these Canadians and others to have their voices heard.